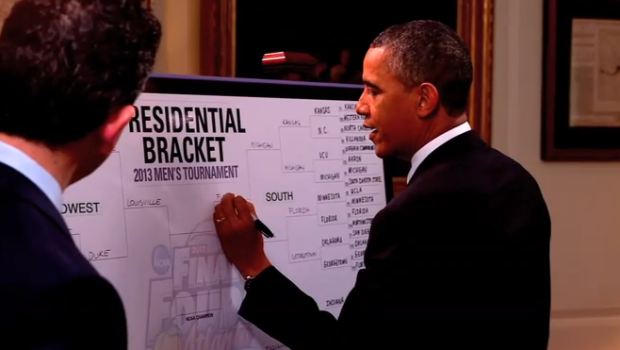 When President Barack Obama is not saving the world from sequestration, he is filling out an NCAA bracket like many of us Americans. President Obama has made this a White House tradition since 2008 being that he’s a basketball lover. His past brackets have both done well and not so well. Some deem his brackets as too safe, but after all he is the President and a politician. This year he has chosen #1 Louisville, #3 Florida, #2 Ohio State, and #1 Indiana to be in the Final Four. He boasts how good of a year the Big Ten(Ohio State, Indiana) has had. President Obama predicts the Championship game to be between two #1 seeds, Louisville and Indiana. He picks his neighboring state, Indiana, to win saying “This is Indiana’s Year”.  View his bracket here.

Watch the hilarious President Obama fill out his bracket: