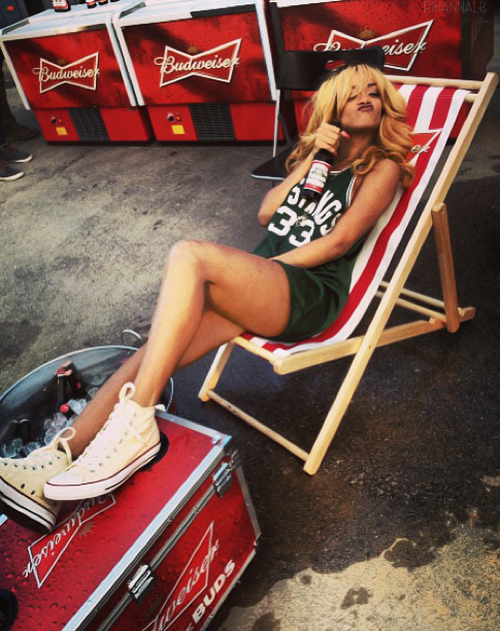 “Call Jay up and close a deal”

Budweiser has decided to enlist Rihanna to be a part of their ‘Made for Music’ global campaign designed to reach 85 countries. The effort will commence next week and will include TV commercials, limited-edition packaging, digital executions, out-of-home advertising and sponsorships, and sponsorships of of Rihanna’s concerts. The effort also entails Jay-Z in the exact same capacity. This campaign is Budweiser’s first coordinated international push involving music. The brewer is looking to create a global beer brand on par with Coke’s branding in the soda category.

“[Music] allows us to bring Budweiser back as an icon of pop culture … it has been a tremendous force in shaping pop culture around the world.” – Ricardo Marques, Global Advertising Director

This global effort was inspired by the Made In America music festival, which Jay-Z curated for Budweiser. While this effort will have a separate identity than the festival, it will weave it’s brand into Jay-Z and Rihanna concerts. In addition, the brand will partner with Facebook to create custom content and YouTube, which will feature behind the scene footage of their TV campaign titled “Dreams are Made”. The deal covers 160 events in 25 countries including. Justin Timberlake is also a part of this campaign due to his upcoming tour with Jay-Z titled “Legends of the Summer”. Timberlake was also the “creative and musical curator” for the brewer’s Bud Light Platinum line extension.

Watch two commercials that will begin airing featuring Rihanna and Jay-Z below: