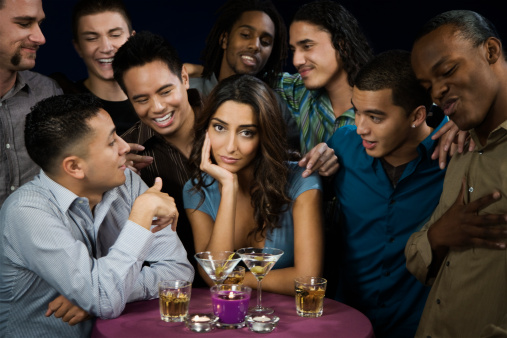 They say most things in life come in threes. Even as children our association of positive things typically come in threes: Goldilocks and the Three Bears, the three ring circus, three little pigs, Destiny’s Child. We’re even given our introduction to bike riding with a  three wheel device before we make the awkward transition to a bicycle. As children, we see gratifying examples of threes, and then as adults we’re brought down from that euphoric state after realizing that everything in threes isn’t always so pleasant. Deaths transpire in threes, after three strikes we’re out, and trouble comes in threes.

Walt Disney brought a false reality right to our living rooms as we all sat around and watched and listened to the cliché stories told of princesses having happily ever afters with their prince charming. As a result we believed that finding our future mates would be just that easy. Some of us have reached a point in our lives where our friends are getting married and some even having children. And while many of us are happy for our friends but can’t even begin to fathom making those transitions at this point in our lives, we may have begun to feel a slight tug on our ovaries, beckoning for us. But the dating pool has brought a few interesting people in our lives that may have delayed our abilities to answer that call:

If Never Never Land was a real place, he’d be the one leading the way to help everyone trying to escape the realities of adulthood. He’s allergic to all things involving commitment and he’s rarely ever consistent in his communication with you. When you try to have an open discussion with him about his lack of communication, his response is usually vague. Due to his carefree nature, you find yourself questioning his level of interest on a regular basis. Similar to the arrogant guy, you’re determined to stick around in hopes that you’ll be the one to change him knowing that your likelihood of doing that is beyond slim. Maybe he’ll grow up eventually, but chances are it won’t be happening anytime soon. And in the words of Sweet Brown, “ain’t nobody got time for that!”

He’s the ideal life partner: the guy that you can take home to your parents and they’d love him instantly, your friends enjoy being around him, and the guy that you know you could have as close to a perfect balance as it gets in a relationship….but for some foolish reason, in spite of your interest in him, the only place you seem to want to put him in your life is in the friend-zone. He seems to have things together in every aspect of his life. He provides a healthy balance to your inner spontaneity and energy because he’s already experienced the wild ambiguities of his 20s and is reaching that point where he wants to settle down. He basically embodies everything you should expect in a person and yet you seem to not want a relationship. He goes out of his way and does the things for you that you secretly wish someone else would.

If you don’t recognize him by his calendar that’s booked with all the biggest social events of the year you’ll certainly realize who you’re dealing with when he opens his mouth. He makes you feel like almost nothing you do will qualify you as girlfriend material and for some reason, rather than realizing you’re better than what he’s offering and walking away, you stick around trying to prove to him that you can eventually be what he wants. You’re equally infatuated and annoyed by his arrogance, making it extremely difficult for you to remove yourself from the situation or suppress your feelings. And while you know deep down that in sticking around you’re only setting yourself up for failure, you’re willing to take that risk because your heart is dangling by some semblance of hope;  Hope that one day he’ll create a small space for you in what seems like his big, big world.

The thing that these three types have in common is that 9 times out of 10, they initiated your first encounter and for the first few weeks, things seemed to be going in the right direction. Because of this, you’ve developed some level of attachment to each of them and are afraid of losing them. But here’s the kicker: you cannot allow fear to dictate your decisions.All three of these encounters have taught you something and helped shape you. You’ve identified qualities that you shouldn’t look for, some that you should, and a few that you should run from……..immediately.

Take the process as a learning experience and try not to wait around expecting the fairytale. Enjoy the journey and take as much from each experience as possible. True love takes time, and if you want the real thing eventually, you have to be willing to endure all the bullshit before you get there. Don’t confuse love with an infatuation for something that you don’t really want. And trust your instincts. Reject Walt Disney’s notion that you have to be rescued by some prince. Focus on your personal happiness and growth and trust that everything else will fall into place when you’re ready for it.

What are some love interests you’ve had in your 20s?