With a lot of talk going on about whether collegiate student-athletes should unionize and/or get paid for their talents, there is another huge dilemma that seems to be sliding under the radar. That dilemma is the trend of universities cutting Olympic Sport programs in support of their revenue generating athletic programs. Not too long ago, my Alma Mater [Temple University] cut 7 of their 23 sport programs. Amongst them being the Men’s Indoor and Outdoor Track and Field program, which I had the privilege of being a part of. The other sports were Men’s Gymnastics, Women’s Softball, Men’s Baseball, and Men’s and Women’s Crew. As of recently, the Crew programs have been reinstated. This decision was made due to a recent inside study that found Temple couldn’t continue to properly and adequately fund all 23 sports and their training facilities. The athletic department decided it was best to switch from the Atlantic-10 Conference to the Big East (now American Athletic Conference) two years ago. A $1 million payment was made for the football program to transfer conferences a season early. In addition, an announcement has been made to build a multi-million dollar football stadium in North Philadelphia. Temple Football currently plays it’s game at a rented Lincoln Financial Field (Eagle’s Stadium). This trend is all too familiar as schools such as Maryland and Seton Hall have done the same to some of it’s programs, while spending money on other projects. 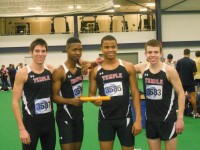 How being able to compete in a D1 collegiate program helped me:

Striving for an athletic scholarship kept me focused throughout high school. My drive to achieve this feat was unbreakable even during times of injury. College was not an option to both my parents and I, but mandatory. Even though my parents, who immigrated from Jamaica in the 80’s never attended college they were hell-bent on making sure I’d be the first one. Although college was not an option, I knew my parents weren’t capable of funding me for the next four years. Out-of-state tuition basically starts at around $30k per year. I was recruited to the University of Pittsburgh, but after a great year athletically and academically I chose to transfer to Temple University to pursue a major in Strategic Communications. My scholarships at both institutions allowed me to actually attend schools that I wanted to attend and not just settle for a school that I only could afford. A lot of kids are opting out for community colleges and are staying in-state due to the rising tuition cost. I couldn’t imagine my college experience without being part of a collegiate team. We were a family and were forced to be around each other hours on end, which led to us to be very motivating and supporting of each other and each person’s goals.Even today, we support each other’s ventures and remain in constant contact. The structure surrounding being a student-athlete helped tremendously to navigate through the strenuous, but enjoyable times that is college. The mandatory study halls, on-hand academic advisers, free tutoring, etc. are just a few components that helps propel a student-athlete to succeed and surpass the “dumb jock” stereotype. Competing in D1 athletics allowed me to visit places I may have never visited, meet a ton of people I may have never met, and have given me memories for many “Throwback Thursday” pictures to post for a lifetime.  Don’t get me mistaken, the ride wasn’t all smooth. There were definitely bumps in the road, but when all is said and done I became a more driven and better person after I got off that ride.

On January 27th, 2012, I became the first person in my immediate family to obtain a Bachelor’s degree and now I’m utilizing the strategic communications skills that I’ve obtained with this successful blog and my current position in a communications office at a major university. The drive that was instilled in me through being a collegiate athlete is still present and is helping me survive and prosper in the “real world”.

One thought on “Save The Sports: How track & field allowed me to be a first generation college graduate”