In an era that is increasingly becoming more health conscious, do you consider eating habits when you are dating someone? Are eating habits a deal breaker?

Can a vegetarian date a meat eater? (Jordan)

Because I’ve never actually dated another vegetarian, I would have to say that dating someone who eats meal isn’t a deal breaker for me. I had to learn to accept that most people simply aren’t willing to give up meat and truthfully, I don’t expect them to. When I made the decision to no longer eat meat, I did it with the understanding that it was a personal choice and it would be completely unfair to look down on others for not sharing the same beliefs. After all, the United States has one of the largest and most profitable meat industries. If I were to decide against dating people based upon their decision to continue eating meat, I might as well start collecting cats now because I’d probably be single for the rest of my life. – Jordan

Can a vegan date ANYONE?

I believe dating a vegan is quite tough, but very doable. Research on restaurants prior to dates is necessary, but can force you to think outside of the box in addition to further culture yourself. You must let go of your selfishness and indulge into theirs and become a vegan, at least when you’re around each other. With that said, my uncle is a vegan with a wife and kids. He cooks himself vegan dishes, but also cooks animal dishes for his wife and kids. He’s a big believer of home cooked meals and despises fast food, but he doesn’t force too much of his beliefs on his family. – Aaron 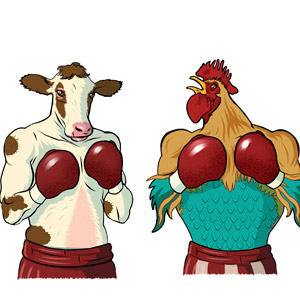 As someone who gave up beef in the last two years and has never eaten pork, I can say dating someone who eats beef does at times present challenges. Don’t take me on dates to restaurants like Fogo de Chao or steakhouses. That’s just rude, and I’m left with a bad mood and an empty stomach. I’m not very pleasant under those conditions. I think it also depends on the type of area in which you live. I was raised in the south, where pig feet, pork chops, and steak are plentiful. It makes it a lot tougher to find someone who has a similar diet, let alone, date someone who doesn’t share the same food values. Ultimately, I think the key is to be respectful and considerate of each other’s food restrictions or lack thereof. – Aliyah

Eating habits matter a big deal to me when dating. Now-a-days I highly doubt that I can date an extreme carnivore or someone who isn’t health conscious due to my serious interest in fitness and health. Like Aliyah, I too once gave up beef and pork, but occasionally craved a delicious steak or hamburger. Moderation is key.   My diet at the end of 2013 and in 2014, so far mainly consists of vegetarian and pescatarian dishes. I have a four animal protein meal quota per week, which mainly consists of chicken dishes. Too much animal protein can be bad for you and there are many other foods that can supply you with an ample amount of protein. Another issue I consider while dating is the intake of fast foods. Though we are a busy generation, socially and professionally, I believe there is a such thing as too much fast food. I’ve found that having a special diet forces you to cook more often or eat at places with healthier prepared dishes. As I grow older health and fitness becomes a bigger deal to me, mostly due to results of bad eating habits that I have seen with prior generations. Yes, I consider eating habits when dating, but also if a person doesn’t share my beliefs in eating habits then I make it my task to upgrade them!

Do you consider eating habits when dating?