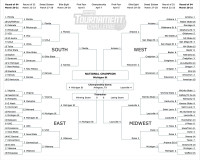 President Barack Obama appeared on ESPN’s Bracketology to fill out his NCAA tournament bracket(pictured above). Last year Obama’s bracket finished amongst the 2 millions out of about 5 million brackets. The president’s final four choices include #4 Louisville, #4 Michigan State, #1 Florida, and #1 Arizona. Obama has Louisville and Michigan State facing off in the final game with Michigan State pulling off the victory. His bracket appears to be pretty safe. Watch the clip below:

How does your bracket compare to President Obama’s?