For the last couple years Shonda Rhimes has captivated large audiences with her productions and plots that have kept our pulses at an unsteady rate of 150 beats a minute. As I sat in on multiple conversations feeling left out, I reluctantly decided to take part in the conversation by giving Scandal a try. And now, after three seasons, I’m regretting that decision.

Season two peaked my interest for a bit. The Olivia/Fitz love affair was cute for a few weeks, but now I’m starting to feel as if Shonda is toying with my emotions. Initially, I admired Olivia Pope’s character because of her position of authority. She’s one of very few black women playing a lead role on a major network. But not only is she the lead actor, she’s a leader. She’s not a criminal and she’s not a drug addict as black women are traditionally portrayed on television.

She’s a boss day in and day out, and she makes decisions everyday as the head of her consulting firm, Pope and Associates. And while I appreciate the strength and leadership that she embodies, I am also bothered by a new trend of black actresses and the roles that they portray. Gabrielle Union is also an example of this trend with her role in the new show, Being Mary Jane.

When I discuss Scandal with others they’re typically siding with Olivia Pope describing just how in love Olivia and Fitz really are, as if their feelings for each other will justify Fitz having an 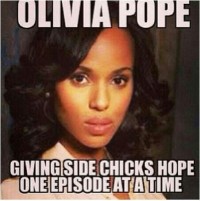 affair and Olivia being a “side chick”. My issue with these shows is that it appears that they have attracted an audience that has completely overlooked the continuous sexual exploitation of black women in the interests of being entertained by a love story. And this love story has evolved to the point that it’s not really conveying love at all. Every scene involving Olivia and the President in a room alone together consists of little, to no dialogue unless she’s resisting another sexual escapade. We all know the general outcome of that, as she typically concedes to her sexual desires.

For years we’ve seen this trend in the media from Halle Berry’s role in Monster’s Ball to the current themes of the aggressive, sexually charged women in Being Mary Jane and Scandal. The more recent trends, however, show successful businesswomen in these roles. Could the business suits and the success of these women just be  the writers’ attempts to dress up an underlying social issue?

In the 80s and 90s, it was Claire Huxtable and Aunt Vivian that audiences adored and admired. These strong black female role models were some of the few positive portrayals of black women that we saw on major networks. And now, in 2014, the people that black women see on television that look like them are either fighting about gossip(as seen on reality shows) or looking for love in all the wrong places.

It is our duty to tell stories in the way that we want black women to be depicted.  We must reject the over-sexualization of our culture. Rather than representing sex symbols and constantly being objectified, young black women need to see positive role models on television who look like them.

“My whole life is you. I can’t breathe because I’m waiting for you. You own me. You control me. I belong to you.”  -Olivia Pope

If we’re going to continue to come back every Thursday night, wine in hand, I’d rather see Miss Pope taking control of her own life- a life that doesn’t involve a married man. Olivia fixes scandals day in and day out, but the scandal I’d most like to see go away is unfortunately the biggest scandal of the show.

How do  you feel about the black female roles in television today?