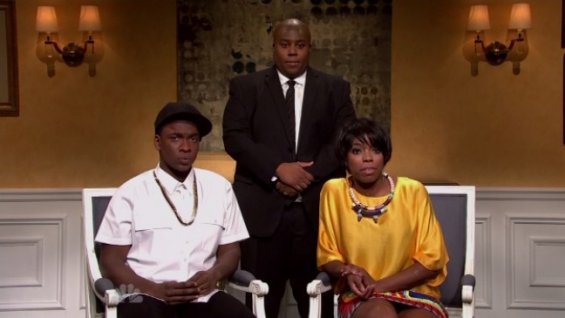 By now, the altercation between Jay Z and Solange has become last week’s new (well… literally) and while we’ve seen a slew of humorous responses to the leaked footage, it wouldn’t be the same if Saturday Night Live didn’t get the last laugh. With Jay Pharaoh in the role of Jay Z and new-comer Sasheer Zamata playing the Solange the two attempt to offer an explanation for what “actually” happened even going on to provide a version of the footage with audio. Meanwhile, Kenan Thompson plays Julius (The Bodyguard) who is clearly prepared for the worst to occur and often contradicts the “happy image” that the two are portraying. However when Beyoncé enters the room (played by SNL Alum Maya Rudolph) what ensues is pure comedy.

Watch the skit below: