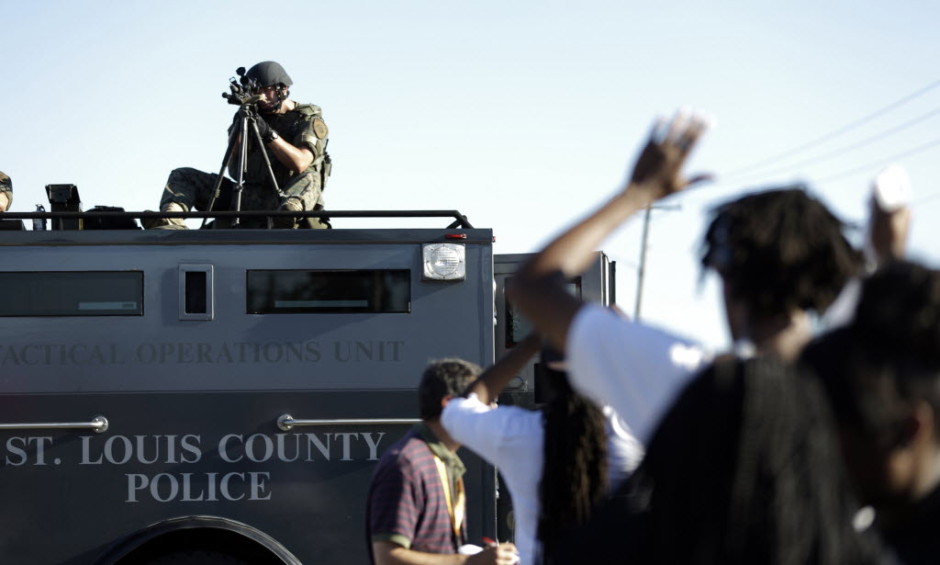 This post was initially a response to the now widespread story of Mike Brown, whose life was recently taken at the hands of a Ferguson police officer, but after its inception, another young man, Ezell Ford, lost his life after being fatally shot by the LAPD. From July 17 to today, less than a month, four African American males have been unnecessarily killed at the hands of police officers who swore to serve and protect them. I realized–there is an unspoken war against African American males in this country and as I look in the mirror, I also realize: I’m behind enemy lines.

The condition of my skin, something some of us are fortunate enough to only think about on a superficial level, has been the subtle plague of my existence since birth. I tried my best to ignore it, to blindly, ignorantly and blissfully navigate through my life thinking it would not serve as a factor in how I was perceived or what my worth was. My parents taught me the importance of merit and I hoped so much that my accomplishments, talent, and character would always outweigh the hatred for the beautiful brown layers I was born into. But there they were, they stood there throughout every stage of my development. I was thankful for how the Sun had kissed my skin but quickly saw that others weren’t so impressed. It would manifest in different ways. It would be me overhearing at a young age why I wasn’t allowed over a friend’s house because his parents weren’t comfortable with a Black boy in their household. It would be the countless surprises to how eloquently I spoke or  shock that I was classically trained in music. It would follow me as with each award, each notch on my resume, I was considered more and more of an anomaly. It would stop for a visit when I chose to wear certain clothing that didn’t fit an established mold for the comfort of others. It would follow me as I witness my brother be assaulted as a squad of police looked to arrest him, not understanding his hearing impairment. It would sneak up every time I’d get pulled over in my hometown Baton Rouge, Louisiana, or my college city Washington, D.C. or even my current residence of New York City and be interrogated by police being “lucky I don’t have anything bad on my record” for routine traffic stops. It would grasp the back of my neck and unnerve me when I read stories like Sean Bell, Trayvon Martin, Jordan Davis, and now Mike Brown, John Crawford, Eric Garner and Ezell Ford knowing that it could easily have been my brother, my friends or myself. It would ring over and over in my mind, that in the country I call home–my beautiful brown layers and worse, my life wasn’t deemed as necessary as others. As of lately, I can’t help but be disappointed in how those who look like me have been constantly demonized and how there has been little discourse on how to solve the problems of American perception or how to ease the unfair burden placed on African American males. With each passing day, I hope the beautiful brown layers I have and that so many others possess can truly be accepted in this country. 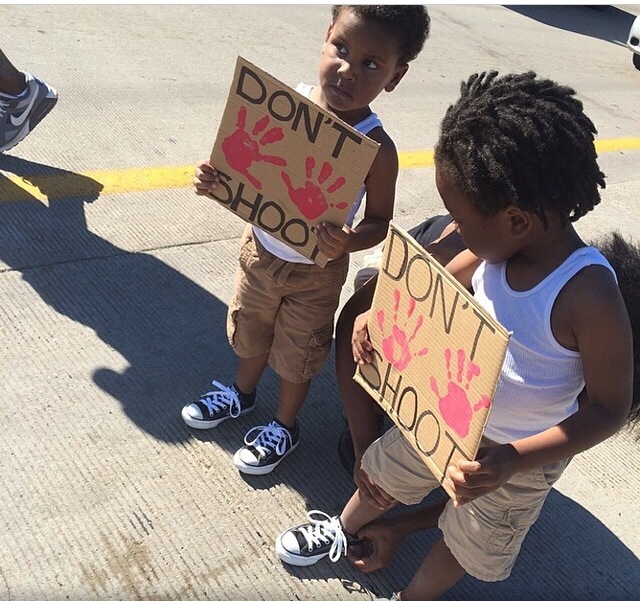 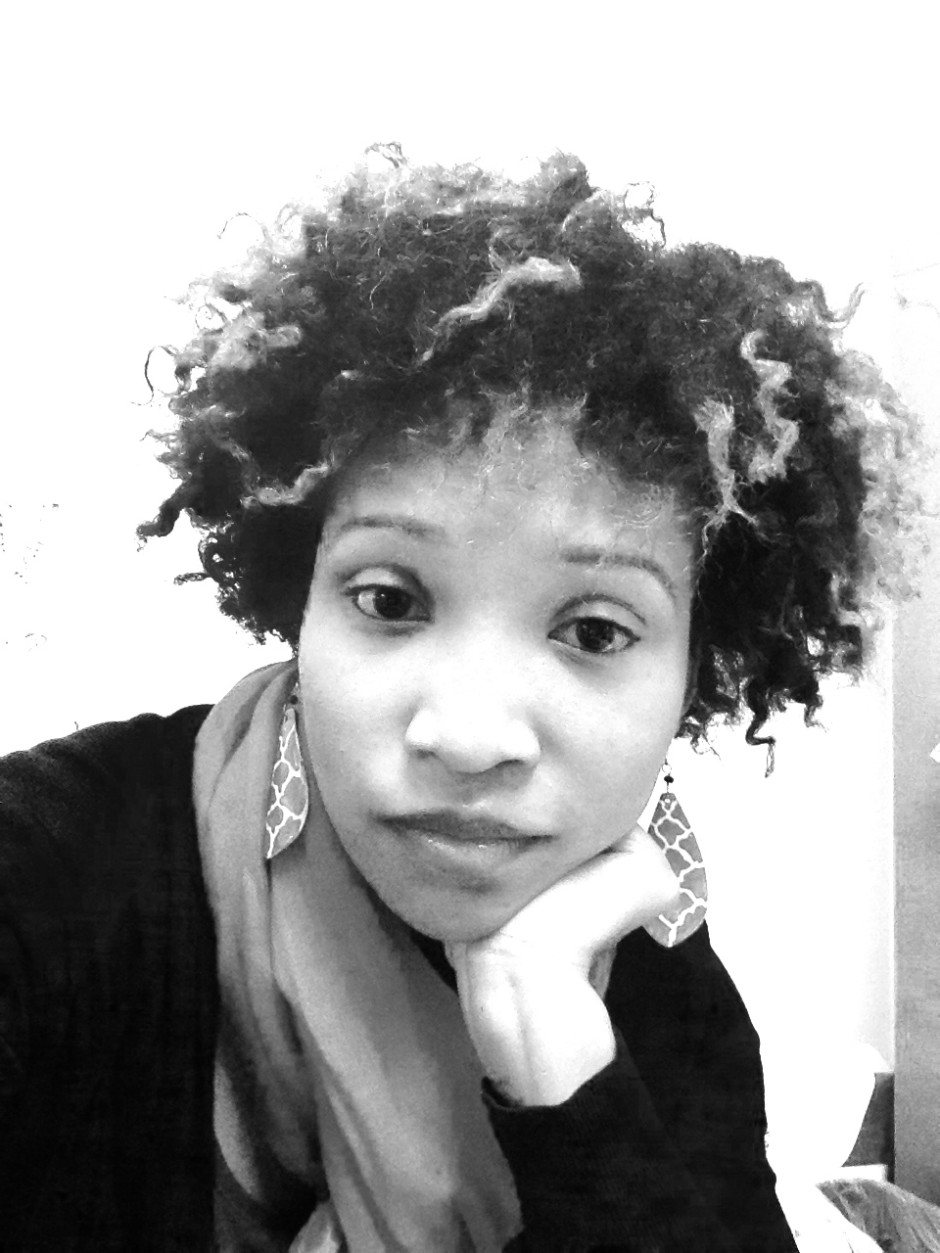 A few seconds is all it takes. In just a few seconds, an officer can make the decision to take a person’s life. On August 9th, an officer, who still has yet to be identified, ended an 18-year old boy’s life. When I departed from home and went to college, facing racism was the farthest thought from my mind because I knew I was moving to a liberal and progressive city. I knew that I’d be in good hands, and even in this city I was racially profiled during my freshman year. The reality of my own struggle really sank in when my younger brother graduated from high school and went to college. He was making a transition from our quiet suburban hometown in South Carolina to a town in North Carolina. My brother is brown-skinned with dreadlocs which, in the state of North Carolina, are physical features that made him a target for random stops by the police. Any one of those times could have resulted in tragedy- a tragedy that happens almost everyday in the lives of young, Black boys. It makes it difficult for me to continuously believe in the good of humanity when people who look just like my younger brother are dehumanized on a regular basis. According to reports, after Michael Brown was shot several times, officials left his body on the concrete for hours.  The message this sends to Black boys is that their lives have no value. Because of this, young Black boys are faced with the daily struggle of living in a society that does not support their overall growth or educational development and does not advocate on their behalf.

Yesterday was my younger brother’s birthday. Yesterday, he turned 23. I never thought I’d be saying this, but considering the painful statistics it’s necessary that I make this point….I’m so blessed to still be able to hug him. I’m blessed that my brother still has the freedoms that many young black boys, like Michael Brown, were not afforded. And as I reflect on this heartbreaking situation, I’m forced to acknowledge the fact that Michael Brown could have been either one of my brothers. And while I’m beyond grateful to have them in my lives, my heart aches constantly for those young black boys who weren’t as fortunate to go home to their families at the end of the day. My heart aches for my future self knowing that I want a son of my own. And my heart aches for all of the families who suffer as their cries for equality and justice fall on deaf ears. 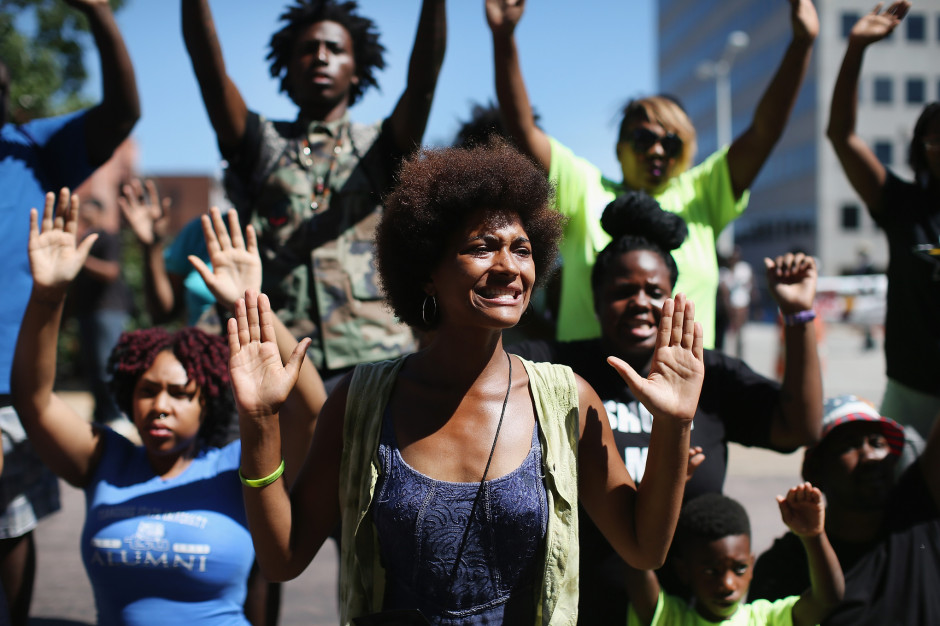 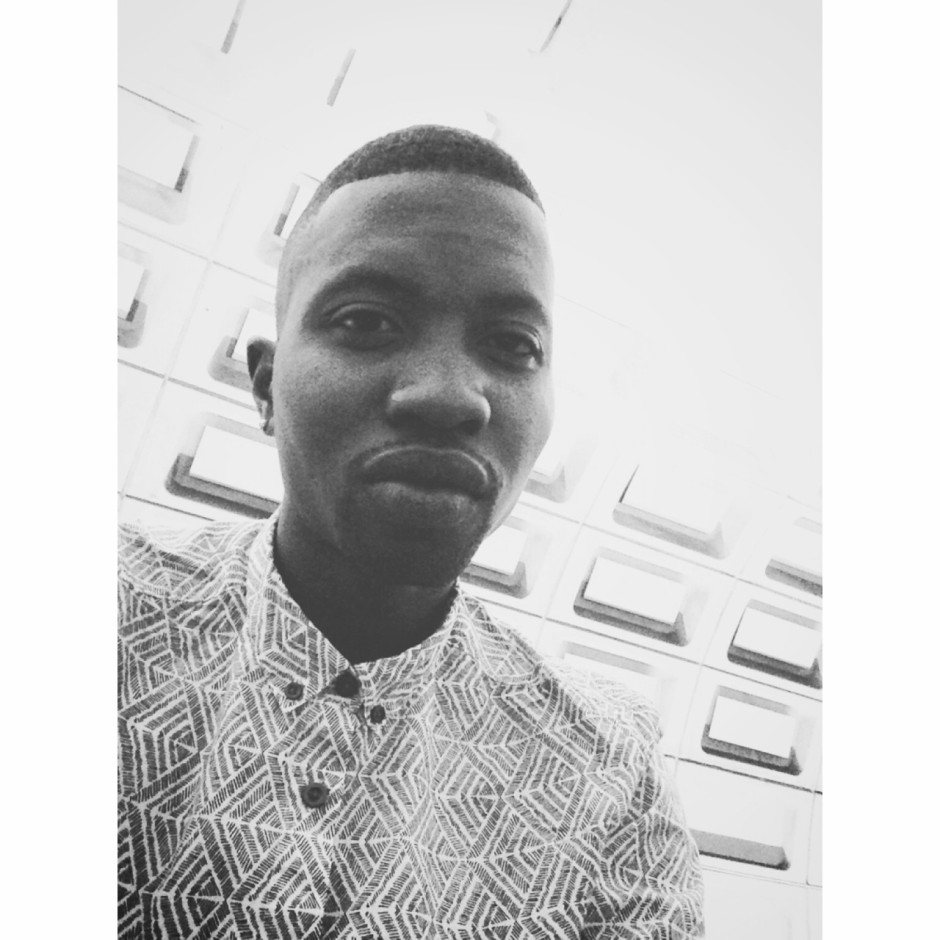 The sadness I felt upon hearing about Trayvon Martin and Mike Brown was not only due to the nature of the “crimes”, but that I have a Black younger brother who frequents a 7 Eleven at night or heads down the street to visit his girlfriend and her family. The uncanny thing is I don’t feel that I’m at risk as a result of these tragedies when it seems that I should. Yes, I am also a Black male of a certain height who loves to wear a hoodie. Each day since graduating college,  I’ve heard stories of how “devalued” Black men are via the news or friends. Up until that point I never thought there is a common notion of the Black males being worthless. Have I finally entered the real world?

I’ve encountered racism growing up, but not the kind that would devalue me or any of my Black male counterparts because at the end of the day we were equal to those males of other races. I attended a predominantly White all-male high school. My school required a test upon entering, which meant all of my Black male peers were pretty talented. At my college, also predominantly White, many we were held to a high esteem in various areas as many of us headed important organizations. Black males have been valued in the communities I’ve chosen to be a part of, but now that I have been forced into the real world, my eyes are opening. I am no longer confined to a community I chose based upon its morals. I have now entered an even larger community whose morals are sometimes based on ignorance. Though I don’t personally feel at risk of being killed for being a Black male, I do see a problem that needs to be fixed. Value yourself and others will have no choice but to value you. I absolutely love being a Black male no matter whats comes with the territory. 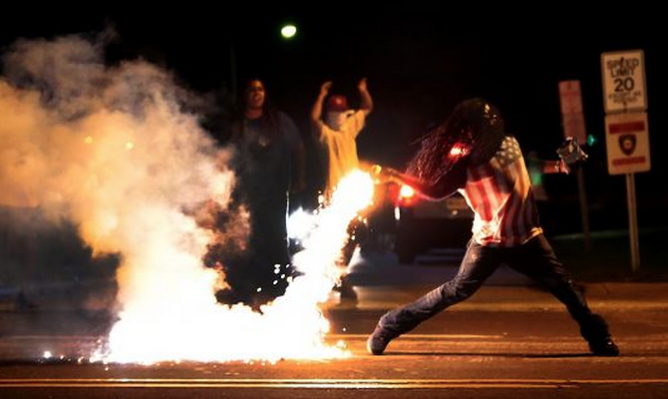 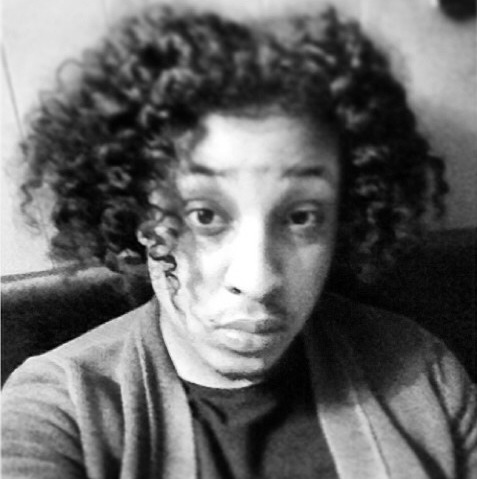 Perhaps my sheltered upbringing shielded me from the realities of the war that I face each day that I step outside of my front door. Although my parents always instilled in me the notion that racial inequality was still very much alive in this country, never in a million years did I expect for it to be this upfront and blatant. Growing up, it was imperative that I had a full knowledge  and understanding of the history of my people. Our struggles, the obstacles that were placed in our path with seemingly no logical explanation and the way that we continued to triumph and overcome those struggles are recurring themes of our past and present. At a younger age, my naivety allowed me to believe that the issue of race did not exist in the way that it had in generations prior. By no means did I believe that we lived in a post racial society, however I felt as though we now enjoyed a greater sense of equality and freedom because of what our ancestors had endured. The election of President Barack Obama and the amount of disrespect that he has endured throughout his presidency often in relation to his race, opened my eyes to what we were truly up against. Additionally, I was raised to respect law enforcement based upon the idea that they put their lives on the line to ensure our security. Presently, I find that very difficult to do when police are the very ones targeting those they are hired to serve and protect. This is especially problematic because Black men in America are seemingly public enemy number one. The other day, I read a very disturbing statistic: “A Black man is killed every 28 hours in the United States by police or vigilante.” Ferguson’s response to the unexplained killing of 18-year old Michael Brown highlights the amount of  warranted civil unrest that still exists in the country. Although you may not understand the methods that are being used in an attempt to acquire justice, you cannot ignore the fact the we are justifiably fed up with constantly being told that we are worthless through the senseless and unapologetic killing of our people.

Growing up as a Black boy, I was blinded to some of the issues that we face as a community. As I grew into a Black man, I became overwhelmingly aware and know that we are in dire need of  sustainable solutions but a great deal of that begins with understanding our self worth. To all of the other “Black boys” of America, your life is not worthless. You are a meaningful factor of society and more importantly your life does matter. We are the fathers, sons, uncles, nephews, cousins and friends of nobility. We make up a vital portion of the community and contribute to the overall good. Never allow anyone to dim your light or tell you otherwise. You come from and are capable of greatness. 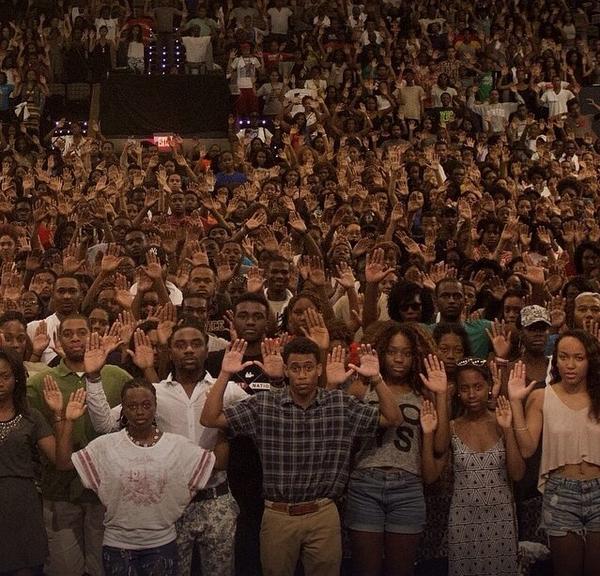 Will you stand with justice for Black boys in America?

-The Students of Happy Hour

One thought on “The Condition of My Skin: Four Reactions to the War on Black Boys in America”